Dear America, Own Your Shit

We have a problem. A long-standing, festering, cancerous, disease-on-our-heart kind of problem. I won't mince words with you, I won't sugar coat or ease you into the light because we've all had plenty of time to look it in the face and say "this is who we are."

America, we are racists.

From the founding to the 45th, we've been racists. We built the country on it. We advanced industry on it. We brutalized, murdered, segregated, and excused paying lower wages because of it. We've started wars over it and burned churches, houses, and entire cities to the ground because you guessed it, we're fucking racists.

Now look in the mirror, and own it.

Own slavery. Own segregation. Own Jim Crow. Own lynchings. Own gerrymandering. Own the wage gap. Own unjust targeted prosecution and incarceration (the new slavery). Own the tone-deaf support of #AllLivesMatter. Own police brutality. Own accepting the racist rhetoric that led to the election of a leader who is wholly unfit for the office of the President. Own that it was really this deep-seeded racism that made President Obama's terms in office so reprehensible to so many. Own that Americans called their first lady a "monkey." Own the fact that even if you're poor and white, you're systemically better off than being poor and black. 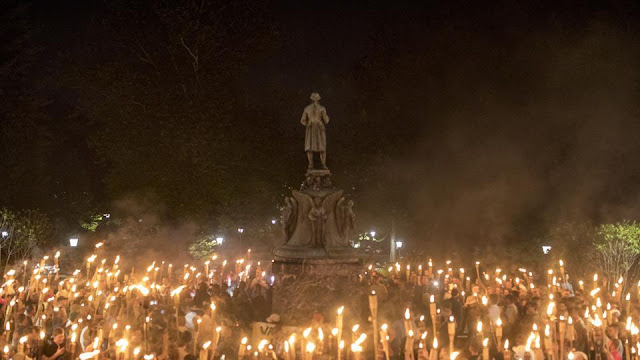 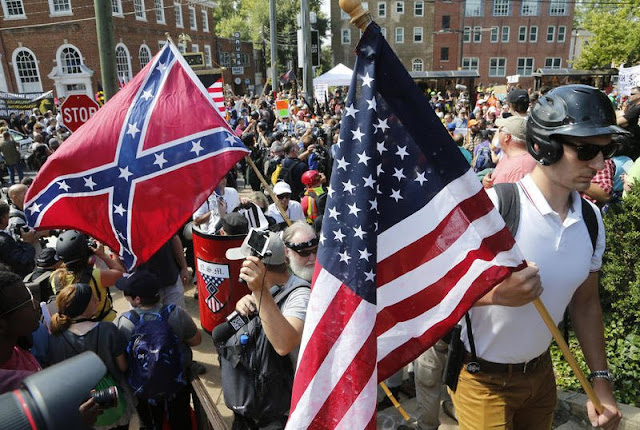 Own the shame. Own the guilt. Because we all let it get this far. If you're an American, this is OUR history. Not theirs, not those who came before, it's ours. Own this shit so that we can face it. Own it so that, hopefully, we can grow from it and become a better nation. Better people. People worthy of being called "the free and the brave." Because right now, we're anything but that. Right now, we're a country that has free-fallen into a climate where a bunch of butthurt Neo-Nazi white bros with tiki torches think it's socially acceptable to march into a college town and throw up Nazi salutes with "Heil Trump" and "White Power" spewing from their lips. We created this climate. Own it. We created a climate (actually, we've been legislating this climate) where you can plow your car through a group of peaceful anti-Nazi protesters, killing 1 person and injuring 19 others and not be considered a domestic terrorist. Isis terrorists have been doing this in London and they are called what they are: TERRORISTS. But not here. Not if you're white.

What do you honestly think would have happened if a group of black people armed with guns, knives, and torches marched on a city en-masse? Well, the white folks did it, and they all just went home after. And why were they there? Because they cherish the Confederacy. They hold in high esteem the years that America warred against itself over its racist heart. As a point of fact, the Confederacy is not exactly something a non-racist person would cherish. It is a deep and long scar across the face of America. Those statues are not of heroes, they are usurpers. They are traitors. What place of honor do they hold in our town squares? None, you racists. But for 200 years America has been totally cool with their presence. Towering reminders to our black citizens of the bigotry that still lives in so many hearts today. Shameful as fuck. Own it.

The Tweeter-in-Chief says there is "hate on all sides..." and Orin Fucking Hatch says "Their tiki torches may be fueled by citronella but their ideas are fueled by hate, and have no place in civil society." WTF. First of all, I don't see "hate on all sides." I see racist hatred and justifiable anger opposing each other. Two very different things, Donald. Also, Orin, good on you for attempting to call it out, but maybe also look back at your Good-Ole-Boy GOP voting record and own that shit (see also, systemic racism).


Their tiki torches may be fueled by citronella but their ideas are fueled by hate, & have no place in civil society. https://t.co/himqTMBQnH
— Senator Hatch Office (@senorrinhatch) August 12, 2017


And lest you think I am immune from my own "owning", I'm not. I grew up outside of New Orleans in a suburb that exploded in growth thanks to "white flight" in the late '70's. I went to very integrated schools, but some part of me seemed to think I was better than the black folk when I was young. Maybe it was all those family gatherings where the word "nigger" was thrown around so easily. Indeed, hate and separation are very much taught values as I've come to learn. But in my personal "owning" of racism and facing its reality in my heart, I have been systematically hunting it down and stepping on its throat until dead because that's what it deserves. Racism deserves that kind of destruction because, strange as it may seem, black people don't deserve to be treated differently because they have more damn melanin in their skin, or because they express their culture differently, or because you just don't like that gosh darn rap music and they need to pull up their pants! Basic shit, I know, but it seems as a society that's the kind of lessons that need the most teaching - Basic Humanity 101.

My favorite teacher to this day was from elementary school. Ms. Zenon. I remember her well. Not because she had a very unique last name, but because she loved me. She was a strong, fierce, take-no-shit-from-anybody black woman with a strong faith and bold voice who took this troubled young white boy, struggling with who he was at the deepest levels of himself, kept him after class, made him clean erasers, and took him into her loving arms and told him he was loved. Truly loved. And that stuck in a certain way because I felt it in her soul that she knew what it was to love without condition. I don't know her background, what she'd been through in life, her hardships, and triumphs, but I do know from experience that people who love like that have been through some hard shit.

My friends - and family - who are black continue to teach me on a regular basis how much I need to own, change, grow, and understand. I don't shy away from it. Because I know how imperfect I am. I know how I am capable of ridiculous hate. I also know that I am capable of boundless love. And change. I am capable of change. Owning my issues has allowed me to overcome them. A work in progress for sure. But the pliability of my heart and mind to change toward goodness, justice, and love are the things I strive for and are the things I hope for in my fellow Americans.

We're all capable, and the first step is to own it.

In Love and Frustration,

civility |səˈvilədē|
noun - politeness and courtesy in behavior or speech: I hope we can treat each other with civility and respect.

The Sound and The Feeling - Broken